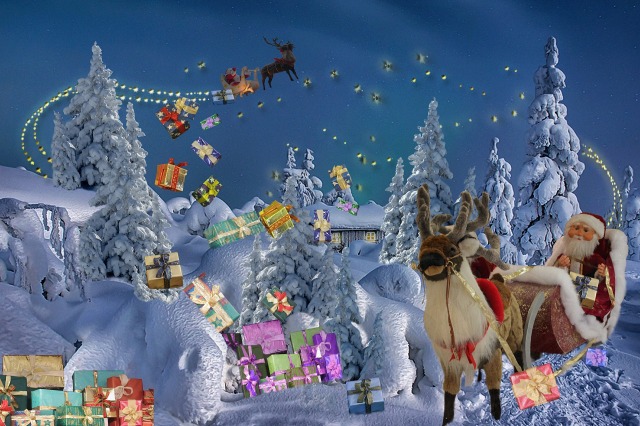 It’s that time of year again.

The Advent calendar’s out, our’s being a felt hanging with numbered pockets which I’m expected to fill with chocolate every night up until the ‘Big Day’ (because, according to my son, carrot sticks and tiny boxes of raisins are ‘not appropriate things to wake up to in December’. Fussy.)

I keep eyeing the ‘Christmas box’, that treasure trove of shimmering nonsense filled with glass teardrops and stars and snowflakes, wondering if I need to buy more fairy lights – even though we have a couple of strings of white, three multi-coloured, one green – because you can never have enough lights up, can you?

And I’ve spent this morning searching the net, ordering books I can collect from bookshops and DVDs straight from the BBC, just so that I can avoid using that global behemoth named after a big, sweaty jungle, because they don’t pay their taxes, the grabbing devils.

In fact, the creature I am NOT thinking of does NOT look like this –

But if I was an Austrian child, and Christmas was just round the corner, maybe that’s exactly who I would be thinking of.

Good word, isn’t it? According to National Geographic, it comes from krampen, the German word for claw.

In several parts of Europe, dear old Krampus is a friend and opposite number to Father Christmas. Whereas in many parts of the world, if a child is on the naughty list, they’ll find a lump of coal in their stocking or nothing at all, our Germanic cousins had to up the ante.

If you’re bad in Austria and Bavaria, Krampus will come to your house, swishing his bundle of birch twigs.

He will hunt you down.

He will snatch you up.

He will stuff you in his basket …

And he will deliver you to HELL!

This grim edge to festive cheer should surprise no one. Germany also brought us Grimm fairy tales, which included such classics as

The Girl Without Hands

And the snappily titled

Wie Kinder Schlachtens miteinander gespielt haben (in English somthing like The Children Who Played Slaughtering) in which children murder each other as part of a butchering game.*

Makes you grateful for the invention of the Playstation.

I’m guessing this demonic, pre-Christian scare-monger was invented to ensure children behaved themselves and I’d applaud that intention – if it wasn’t evident that German children are no better behaved than any other nation’s kids.

Though, if threat of a six foot Devil means I can put carrot sticks in that Advent calendar …

With eternal gratitude to Kat, the founder of W4W