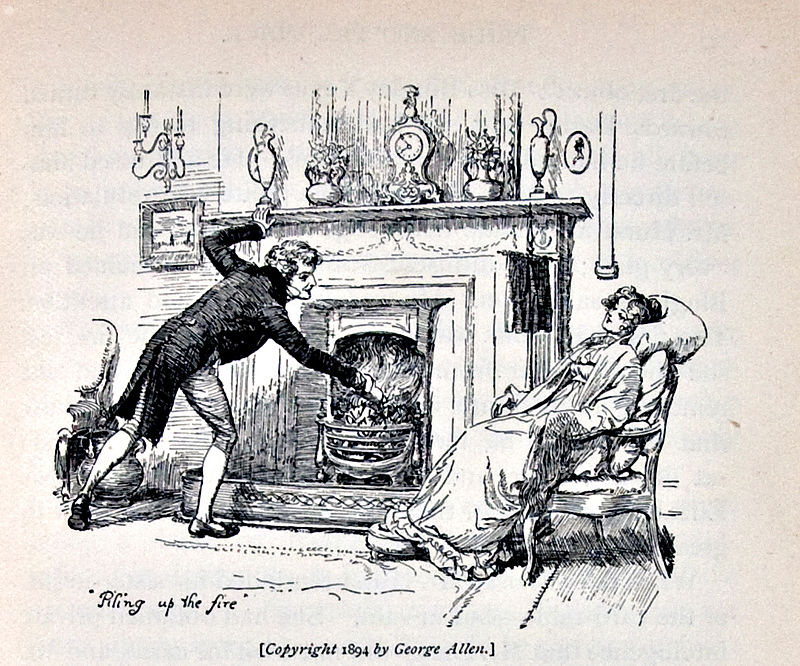 Apologies for Edmund’s absence. This was enforced by travel – mine, not his! – and computer issues. Let’s return to see how he’s faring after the latest unpleasant piece of news – namely that his love, Frances, has chosen the worst scoundrel in London over him.

Now the servant paled, his voice dropping lower still. ‘A bad man, sir. A gentleman by name but not by reputation.’

It was like a thunder clap crashing over me, like lightning striking my head, my shoulders – my heart. For I need not be told who this ‘gentleman’ was.

Frances had thrown her lot in with the Devil. She was with Samuel Longmire Gordon.

I spent that night tramping the open fields of Hampstead, too dazed, my senses too shattered to face Gordon or indeed Slatina. For it seemed to me that between them they had somehow conspired to relieve me of all that had once been mine, from my home to my once and only love, Frances.

At some point I must have collapsed to the ground with exhaustion, for as the pale sun rose over the far haze of London I opened my crusted eyes, stretched limbs contracted by cold and the hard ground. I broke my fast with ale and what little remained of the food, gazing out over the confusion of grimy spires and rooves, the clogging smoke of countless chimneys. What a hard and thankless town it was, filled with cruelty, determined to debase every soul that entered its sooted walls, no matter how pure of heart, how noble. I would shake off its fetters, work my way to the Americas, to some far island of spice and rainbow plumed birds. After years of toil and hardship, I would lay my broken heart to rest in foreign soil.

And so with a determined step, I raised myself from the ground and set off back to the city, heading for the docks and fresh adventure.

I have known this blackened, filthy town of thieves and pickpockets, drunkards and assassins all of my life. I have wandered its streets through the best and worst of times, committing the nonsensical pattern of its neighbourhoods to memory just as a man will recall the mysteries of a lover’s face long after they have parted ways.

So how it could be I found myself not amid masts and sails, the ruined dockside inns, the quarrel of gulls, but by a web-strung holly tree, staring at Samuel Longmire Gordon’s front door, its grotesque knocker in my hand.

I let the knocker fall once and waited. No thoughts passed through my mind as I waited, none of logic or reason in any case. All I saw was the sweet, weeping face of Frances as we parted, all I felt was her fear, all I knew was that in that moment in the drawing room she had needed me, that her need had been real and that she might want me yet.

When finally the door swung open, it was not the tiny scrap of a child standing in the hallway as I had expected but a full grown man. A man of near my height, of pale complexion save for the tributaries and confluences of veins beneath the skin.

‘Slatina.’ I was not surprised to find the man there, for I had begun to feel his dark presence, a thread of evil running through my life.

He smiled, bowed and for the first time I saw that action for what it was – a mockery of myself, of my class.

Before he could speak, I said, ‘Take me to Frances.’

He bowed again, stepping aside that I might pass. The door slammed shut behind me, the bolts sliding home.

The hall was little changed from my last visit – the same shards of broken glass lay about the floor, the same stink of filth assailed my senses. The only change was the quiet. There was no sound of a fiddle playing, no frantic dog barking to be free and every room I passed was deserted, furnished with nothing but shadows and my own memories.

I made for the room I had visited before, but Slatina said softly, ‘Upstairs, Edmund. You will know where.’

If I had been less exhausted, more in my own senses, perhaps I would have been more careful, would have stopped to arm myself. I might have considered my ease of access to that place a trap. But all I could think of was Frances.

A broad staircase swept before me, the gilded metalwork now tarnished, the marble steps thick with candle grease and dirt. Although the morning was half over, the city’s filth overlaid every window, turning the sunlight grey and gauzy, making the way dim. At the head of the stairs the light was darker still, every door wreathed in shadows deep enough to hide a man. I walked breathless along the hall, stopping at each door, listening for signs of movement but found none.

Finally, there was a door a little ajar, a pale light falling through the gap. A glint of gold caught my eye and then was gone. Heart in my mouth, I took another step. There was the glint again, a bright shimmer by the door handle. I reached out, felt the fine chain in my fingers, the weight of Frances’ locket in my palm as I lifted it free of the handle. Pushing wide the door, I stepped inside.

The room was hideously familiar from my own youth – the drawn curtains, dim light, the frousty, closed in smell of human bodies and waste. A sick room. I drew close to the figure in the bed, not wanting to see who lay therein, already knowing but dreading to witness the fact with my own eyes.

The hair was the same, though tangled and damp with sweat, the skin waxy, eyes bulging beneath taut lids.

The lids flickered and she saw me, her expression a mix of relief and sadness. ‘Edmund,’ she whispered.

How was it possible she had come to such a sorry state since our last meeting? I knelt beside the bed, took her hand in mine. Her bones were light as tissue and there was a smell about her breath, a sign that Death was even now creeping over her, waiting to clutch her heart. She gestured to the locket, hanging from my fingers.

‘Open it,’ she breathed.

I placed her hand gently on the counterpane and with trembling fingers, opened the locket. It took a moment for me to realise that I knew both of the figures depicted therein. One was a woman and from the various tiny marks on her face, one afflicted with vile diseases. The other was a child, a boy no more than six years of age. He wore a powdered wig and a coat of blue velvet. It was the poor, sad waif who had opened the door to last time I had visited that very house

‘And so even the brightest light must dim and fade into darkness.’

Samuel was hunched in the corner of the room, a brandy bottle clutched in his hands. ‘Coral Flitting was not refined or genteel. But she was a kind soul. Ever willing to laugh.’ He sobbed, the saddest, most desolate sound imaginable.

With a heart of lead, dreading the answer, I asked, ‘What happened here, Samuel? What has become of Miss Flitting and this poor child?’

10 thoughts on “The Devil of Moravia : Every light must dim and fade to darkness”