We’re over halfway through our Advent calendar. My kitchen is filling up with nuts – roasted monkeys, salted and dry roasted peanuts, in their shells sheathed in a nylon net …

I know these last can be a pain, that all family members are likely to visit the local hospital some time before the New Year due to injuries from ricochetting almond splinters. But I’ve tried buying the pre-shelled variety and they’re not as much fun. Perhaps it’s that tiny spark of triumph felt when, through sheer brute force, you finally reach that ounce of nutflesh – and without losing a finger.

Anyway half-eaten calendars and nuts equal only one thing – Christmas is nearly upon us.

Working in retail, this means I’ll be in the shop right up until the last day and will no doubt spend Christmas Day half asleep and with my feet up.

But to steer us all through the next week of fighting septagenarians for the last box of crackers / bag of cranberries / sage, chestnut and onion-stuffed pork and bacon crown (with port wine coulis), I have complied – for a festive Wednesday Word Tangle – a short list of books where dear old

has a starring role …

Although Briggs is better known for his story, The Snowman (‘we’re walking in the aaaaaiiir’), this is another great book, a kids’ cartoon from the 1970s  which depicts Father Christmas being bit of a curmudgeon, cussing his way through Christmas deliveries, negotiating cats, TV aerials and milkmen before coming home to a lone turkey dinner.

He’s a boozer, he loves his pipe and takes a hot water bottle to bed with him.

Father Christmas IS an Englishman.

The Lion the Witch and the Wardrobe – C.S.Lewis

You can’t get more Christmassy than this book.

In a snowbound, magical land filled with dwarves and fauns and talking beavers – a land where it is ‘Always winter but never Christmas’ – a tall, gowned figure driving a sleigh appears …

Father Christmass’s visit to the Pevenseys in TLTWATW is bittersweet. Yes, it means that thanks to Aslan, the festive season can finally arrive, the snows begin to melt.

But the fact the old man brings weaponry and a potion that can cure any injury as presents FOR CHILDREN suggests there will be no watching the Queen’s speech and hammering each other at Monopoly this year. 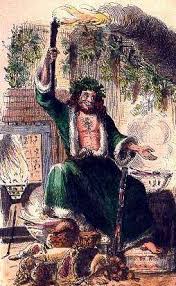 It’s a bit of a cheat, this one, because you won’t find Father Christmas listed in the dramatis personae of Carol.

BUT if you read the description of the Ghost of Christmas Present and see John Leech‘s original illustrations (above), the similarities are pretty obvious.

‘Present’ is a giant, clad in a green, fur-trimmed coat (Father Christmas was often depicted in green before the late 19th C), a holly wreath about his head, shimmering with icicles. He’s full of joy and love for the season, surrounded by food, drink and goodwill that he wants to share with a bemused Scrooge.

He’s more pagan Green Man than Coke marketing icon, but none the worse for that.

It’s thanks to Moore we know what Nick’s reindeer are called (though Rudolph was clearly off sick in 1823 as he is obvious by his absence). And the fact that those reindeer are tiny – as is Nick himself. It would explain why it’s so easy for him to get down chimneys, but how many of us actually imagine him as small as he’s described in the poem?

I was struggling to find a lovely version on Youtube. Dick van Dyke nearly made it on here. Then I found this mildly unsettling puppet show (above) from the 50s or 60s to totally creep you out. Enjoy!

What stories featuring Father Christmas / Pere Noel / Santa / Sintaklaas are your favourites? Do share them here.

Thanks to Kat, the founder of W4W